Diverticulitis: What is this condition? 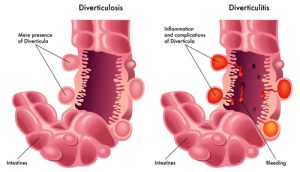 It is often thought that the diverticular formation occurs because of the straining during the bowel movements that put the pressure on the walls of the intestines. This is what causes the inflammation as well as the irritation that in turn lead to the formation of the pouches. However, if one of the pouches becomes inflamed, diverticulosis or the state of having the pouches will turn to diverticulitis.

Diverticulitis usually requires treatment for the reason that it usually causes symptoms and may lead to some serious health conditions. What’s the good thing about this condition is that only 4 percent get acute diverticulitis, and it only affects about 10 to 20 percent of the people has the tendency to progress into symptomatic uncomplicated diverticular illness. This is a condition that causes some similar symptoms to the irritable bowel syndrome, just like bloating and abdominal pain.

Additionally, it usually takes approximately 7 years for the progression of the condition to occur. Furthermore, in every 4 percent of the patients who have diverticulitis, only about 15 percent have the complications.

Always remember that the symptoms of diverticulosis and the diverticulitis are different.

Majority of the people who have this condition has the tendency to not experience any symptoms. However, there may be some episodes of pain in the lower abdomen. More precisely, normally on the lowermost side of the abdomen. Here are some other symptoms of diverticulosis:

When the diverticula get inflamed, the symptoms may be:

The development of the pouches is actually unknown. However, the lack of dietary fiber is more often to be the main cause of it. We know that dietary fiber is beneficial in softening the stools, and not being able to consume enough of it may lead to hard stools. This may lead to more strain or pressure on the colon as the muscle pushes the stool down. In particular, this pressure is what causes the formation or development of diverticula.

Diverticula happen when the weak spots in the colon muscle’s outside layer give way while the inner layer squeezes all through. Even though there is no clear evidence that proves the link between the condition and dietary fiber, research claims that the incidental evidence is quite convincing. However, this particular topic is debated hotly by many.

It is not clear why the condition occurs. But regardless of that, here are some of the factors that may increase the risk of diverticulitis:

Mild cases of this condition may generally be treatable even just by an individual. However, there may be a prescription that will be given to you by your doctor. And it will be one of the most amazing treatments for diverticulitis –the antibiotics. Remember, it is important that you will be able to complete the whole course of the antibiotics, even when the symptoms get better already. There are some people who may experience some drowsiness, vomiting, diarrhea, and nausea when taking the medication.

Furthermore, hospital treatments for diverticulitis may be important if any of these apply: