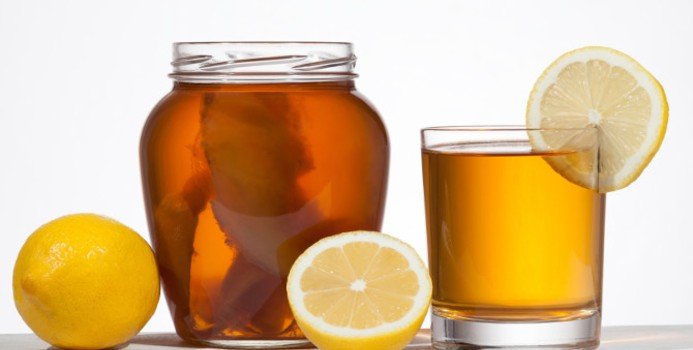 The ancient Chinese discovered the health benefits of kombucha tea more than 2,000 years ago. They considered it to be so powerful that they referred to it as an “immortal health elixir.” Kombucha has been steadily gaining popularity in recent years for its effectiveness in reducing certain health risks and for its ability to promote overall well-being.

Kombucha is a raw, fermented and naturally carbonated tea. It is made by fermenting tea and sugar with a culture of bacteria and yeasts. The taste depends on the type of tea, but it can range from a sparkling apple cider to champagne. Some brands tend to have a slight vinegar taste. Kombucha has recently gained popularity due to its many health benefits. Listed below are some of those benefits:

Because it contains much of the bacteria and enzymes needed for detoxification, it helps unburden the liver and reduces the load on the pancreas. Due to its ability to detoxify the body, kombucha can help prevent and treat cancer.

Kombucha is probiotic and contributes to healthy digestive flora in the gut, which helps break down food and aids absorption.

Kombucha Reduces the Risk of Arthritis

It contains high amounts of glucosamines, which help maintain the lubrication and flexibility of the joints.

It Can Help You Lose Weight

The better your food is digested, the greater your chance of releasing excess weight. For many people, Kombucha also tends to act as an appetite suppressant.

Kombucha contains theanine, which promotes alpha wave production in the brain and increases serotonin levels. The tea has acids which have a calming effect on the body, and this aids depression and anxiety disorders. It can also help with overcoming sleep disorders and improving the overall quality of sleep.

It Boosts the Immune System

Kombucha helps cleanse and detoxify the liver, thus helping restore the body to its natural state.

Kombucha has a natural supply of vitamin B6, along with other B vitamins. Many of its advocates also report younger looking skin and the reduction or elimination of skin conditions like eczema, while other report having healthier hair. Since kombucha has an alkalizing effect on the body, these claims could very well hold merit.

Kombucha can be purchased at most health food stores as well as some mainstream grocery stores. It is available “plain” or with added flavours, such as pomegranate. The important thing to keep in mind is to stay as close to the natural, raw kombucha as possible to achieve the most optimal benefits from it.

Kombucha’s popularity is due in part to the many medicinal properties it is believed to possess. There are anecdotal reports of it being effective against cancer and various other ailments, and many advocates believe it aids in detoxifying and cleansing the liver, but no clinical studies have been performed to verify or debunk these claims.

Whether or not Kombucha can help cure cancer or treat an ailing liver remains to be seen, but it does contain many pro-biotic cultures which are believed to aid in digestion, as well as active enzymes and anti-oxidants which are believed to be anti-cancer agents. Unfortunately, if a person is home-brewing the drink, there is no way to find out the quantity of these unless a sample is sent to a lab, so there is no way of knowing if the proper dose is being consumed.

There are several ways to do brew Kombucha at home, but the preferred method is with sugar and tea. Almost any beverage containing caffeine and sugar will allow the culture to grow, although it might taste less than delicious or even be unpalatable.