What are Nightshade Vegetables?

Nightshade vegetables, scientifically known as Solanum dulcamara, are part of the Solanaceae plant family, which contains approximately 98 genera and about 2.000 different species. This familiy includes innocuous flowers like morning glory as well as toxic herbs like the Atropa belladonna. There are even a few nightshade trees. However, vegetables are a prominent part of the group, and this might be why it’s sometimes referred to as the tomato family or the potato family.

We’ll look at a more thorough list of nightshade vegetables later, but in the meantime, a few of the major ones you might know are: 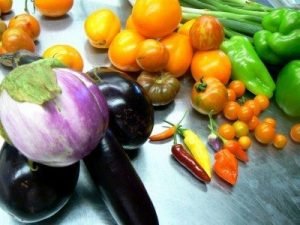 You can even see from this list alone that nightshades cover a wide variety of foods. They may not look like they have much in common, but their compositions are actually really similar. In fact, there are two substances which they all share: alkaloids and calcitriol. So, now you know which foods are nightshades, it’s time to learn more about what’s in them.

Often, alkaloids are recognizable at a molecular level by a ring that has a nitrogen atom, usually derived from amino acids. Nevertheless, there are exceptions to this structure. Alkaloids are the riskiest and strongest components in herbal medicine. In fact, some of the strongest medicinal or recreational herbs come from this plant family.

Some alkaloids of note include:

The nightshade family includes both deadly and safe plants, and the potentially dangerous compounds, if present in the vegetable, is generally not enough to cause immediate effects. Of course, like any other allergy, a nightshade allergy should be taken seriously. If can be hard to pinpoint if you have one, but if you suspect that you do, stop eating nightshade vegetables immediately and reach out to your doctor to get an examination.

There are about 2,000 species of nightshade vegetables. It’s important to know which ones are most commonly consumed, either directly or as an ingredient in something else. The list below is a good start, but it’s recommended to work with a professional to draw out the best diet plan.

Give yourself about three months of trial to determine if you’re allergic to any of these. Solanine may be stored in the body for quite some time.